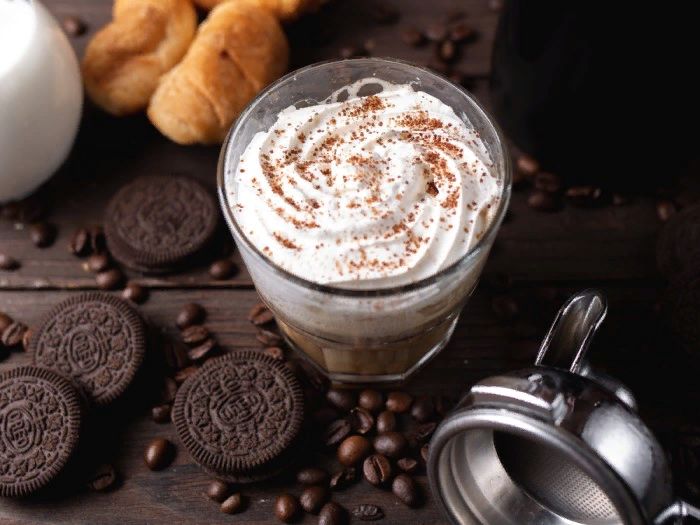 Many coffee enthusiasts appreciate the value of heavy cream in coffee. Although there is no issue if you have never tried it, it’s worth trying out as the flavor will stick with you. On the other hand, the fat present in heavy whipping cream together with the caffeine in coffee might just be what you need to boost your energy on any particular day.

Read along as I share what heavy whipping cream is, its health benefits, and some other things you need to know about it.

What is Heavy Whipped Cream?

Heavy cream is famous because of its versatility and its shelf life in the fridge. Unsurprisingly, heavy cream has a lesser lactose content than milk, which is excellent news for lactose intolerant people as long as it’s used in a low quantity. Another advantage of heavy whipping cream is that it is diet-friendly than whole milk.

What is Whipped Cream Coffee?

Many consider coffee making an art. Even with scaa coffee makers, new flavors of coffee are a favorite pastime of coffee lovers, and many would have tried their coffee with whipped cream. We can all agree that heavy whipping cream in coffee gives you a supreme taste without having to sacrifice the effectiveness of the caffeine in the coffee even after using coffee makers with thermal carafes.

Are you looking to make your coffee tastier? Then you should try the heavy whipped cream. Apart from the heavy cream in coffee giving a silkier texture and making it thicker, it enhances the flavor awesomely.

Can You Use Heavy Cream in Coffee?

If you have been wondering about using heavy cream in the coffee, then you don’t need to bother yourself anymore because the answer is yes, you can. However, it is essential to note that your use of heavy cream in coffee is hinged on moderation, as with every other thing.

To get the best value out of your heavy whipping cream, try to make it at home to monitor the contents. Manufactured heavy whipping cream usually contains preservatives and sweeteners. Although it has a remarkable shelf life, try and use it as soon as possible because it will go sour after a while.

Can You Use Heavy Whipping Cream Instead of Heavy Cream?

So, to answer the question, if you can substitute heavy whipping cream for heavy cream, the answer is yes. It is virtually the same except for the fat content.

Can You Use Heavy Whipping Cream Instead of Half and Half?

Can you use heavy whipping cream instead of milk?

Another thing to note is the difference in flavor. Heavy cream is not as tasty as milk and therefore does not alter the original flavor of the coffee. While milk alters the coffee flavor a bit more.

Can You Use Heavy Cream instead of Coffee Creamer?

Coffee creamers are high in sugar but low in lactose and fat and its usually used alongside hot beverages. It is a good option for people that enjoy taking coffee but want zero fat and lactose in their coffee. Coffee creamers come in powdered, dense, or syrupy forms. Its purpose is to sweeten the coffee exclusively.

In terms of flavor, heavy whipping cream slightly reduces the bitter edge in coffee, while coffee creamer changes the taste because of its high sugar content.

The choice of using heavy whipping cream over coffee creamer and vice-versa solely depends on the individual and their needs. For example, while lactose intolerant persons are not advised to take beverages high in lactose content, and some other individuals want zero fat in their coffee, people are always advised to reduce their sugar intake.

The answer to the question about using heavy cream in coffee instead of coffee creamer is yes, as long as heavy whipping cream is healthy for you.

Yes. Heavy whipping cream in coffee is healthy, although it has its downsides and has to be taken in moderation(1). One of the important macro-nutrient we need in our body for day-to-day activities is fat and fortunately, heavy cream provides just the ideal amount. While the general consensus is that fat is bad for one’s health, it’s too much fat that is actually bad because fat is a necessity.

Ever wondered how we get energy even when we are fasting or have not eaten in a while, it is the fat in our bodies that supplies us with energy. Fat is basically a way for our bodies to store energy and it is released when we need it.

A keto diet is centered around low carbohydrates, adequate-protein, and high fat. Unsurprisingly, heavy cream has the three important requirements for a keto diet. A match made in heaven. So, you can allay your fears about heavy cream in coffee affecting your keto diet.

I am sure you now know that adding heavy whipping cream to coffee is not the nutritional hazard that everybody thought it was. On the contrary, heavy cream in coffee provides superior esthetics alongside a uniquely good coffee flavor accompanied by an adequate dose of fat content, making it healthy to consume and keto-friendly.

Have you  tried heavy whipping cream with your coffee? What’s your take on adding heavy cream to your coffee? Feel free to share with us in the comments.